October 4, 2013
About the Model S fire
By Elon Musk, Chairman, Product Architect & CEO
Earlier this week, a Model S traveling at highway speed struck a large metal object, causing significant damage to the vehicle. A curved section that fell off a semi-trailer was recovered from the roadway near where the accident occurred and, according to the road crew that was on the scene, appears to be the culprit. The geometry of the object caused a powerful lever action as it went under the car, punching upward and impaling the Model S with a peak force on the order of 25 tons. Only a force of this magnitude would be strong enough to punch a 3 inch diameter hole through the quarter inch armor plate protecting the base of the vehicle.

The Model S owner was nonetheless able to exit the highway as instructed by the onboard alert system, bring the car to a stop and depart the vehicle without injury. A fire caused by the impact began in the front battery module – the battery pack has a total of 16 modules – but was contained to the front section of the car by internal firewalls within the pack. Vents built into the battery pack directed the flames down towards the road and away from the vehicle.

When the fire department arrived, they observed standard procedure, which was to gain access to the source of the fire by puncturing holes in the top of the battery's protective metal plate and applying water. For the Model S lithium-ion battery, it was correct to apply water (vs. dry chemical extinguisher), but not to puncture the metal firewall, as the newly created holes allowed the flames to then vent upwards into the front trunk section of the Model S. Nonetheless, a combination of water followed by dry chemical extinguisher quickly brought the fire to an end.

It is important to note that the fire in the battery was contained to a small section near the front by the internal firewalls built into the pack structure. At no point did fire enter the passenger compartment.

Had a conventional gasoline car encountered the same object on the highway, the result could have been far worse. A typical gasoline car only has a thin metal sheet protecting the underbody, leaving it vulnerable to destruction of the fuel supply lines or fuel tank, which causes a pool of gasoline to form and often burn the entire car to the ground. In contrast, the combustion energy of our battery pack is only about 10% of the energy contained in a gasoline tank and is divided into 16 modules with firewalls in between. As a consequence, the effective combustion potential is only about 1% that of the fuel in a comparable gasoline sedan.

The nationwide driving statistics make this very clear: there are 150,000 car fires per year according to the National Fire Protection Association, and Americans drive about 3 trillion miles per year according to the Department of Transportation. That equates to 1 vehicle fire for every 20 million miles driven, compared to 1 fire in over 100 million miles for Tesla. This means you are 5 times more likely to experience a fire in a conventional gasoline car than a Tesla!

For consumers concerned about fire risk, there should be absolutely zero doubt that it is safer to power a car with a battery than a large tank of highly flammable liquid.

The word for fire in French is "feu." We're not sure how to correctly translate "conspiracy theory," so we'll leave that one alone for now. Two Bollore Bluecar electric vehicles that were part of Autolib's carsharing service in Paris caught fire and were destroyed earlier this week, Plug In Cars reports. The cars were part of a 2,000-car fleet for Autolib. There were no injuries.

Local authorities investigating the incident haven't determined the cause of the blaze, though that hasn't stopped either Bollore or Plug In Cars from coming up with their own theories. Bollore, says Plug In Cars, immediately laid the blame on vandalism. Plug In Cars, meanwhile, noted that the cars were parked in a fairly upscale neighborhood, and pontificated on how electric vehicles can theoretically catch fire. And while those cars wouldn't be the first plug-ins to do so - a Mitsubishi Outlander Plug-in had its battery melt earlier this year, while a NHTSA investigation into a 2011 Chevrolet Volt fire concluded that plug-in vehicles were at no greater risk for fires than conventional cars - we will stress that no cause has been determined for the Paris fire.

Autolib has gained about 100,000 subscribers in Paris since launching its service there in late 2010, Reuters said in a separate article, and Bollore has since received a loan of about $100 million from the European Investment Bank (EIB) to expand the service. Autolib is also looking to start US operations in Indianapolis as early as next year. 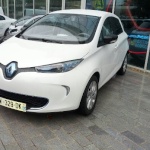